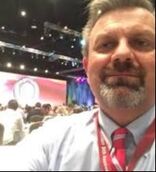 Dave is a 27-year veteran of the North Carolina State Highway Patrol, starting his career in October 1987. Dave rose through the ranks from entry-level trooper to the rank of Captain where he oversaw the Charlotte operational region.

​In February of 2015, David retired from the NCSHP and began volunteering as a reserve police officer with the Bessemer City Police Department in North Carolina. David also transitioned from part-time to full-time faculty with the FBI Law Enforcement Executive Development Association (LEEDA) having taught hundreds of courses and thousands of law enforcement leaders from around the world. Dave also serves as the Chief Leadership Officer for the CPLE International working across all levels of our leadership and ethics programs including co-founding the new DISC Behavioral Model Facilitator Certification program and the Crossing Program.
​
David has a Bachelor’s degree in Criminal Justice from Western Carolina University, a Master’s degree in Public Administration from the University of North Carolina at Pembroke and is working towards his PhD from Anderson University in Anderson, South Carolina. In 2013, Dave attended Session 252 of the FBI National Academy and was selected as the class spokesperson.
Center for Police Leadership & Ethics International (CPLE)